Violent Borders - Refugees and the Right to Move 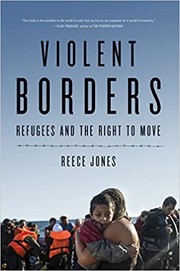 Borders that are open for corporations, capital and consumer goods but closed for workers and regulators create huge wealth and opportunity inequalities, both within and between countries.

State borders are a relatively new concept, which create, rather than represent, differences between peoples and places. They exacerbate "groupisms" such as nationalism and racism.

State borders also create, rather than contain, violence against people - both directly and indirectly.

Contrary to a common notion, globalisation hasn't undermined the power of the state in terms of being a container for the source of political power.

Problems such as environmental damage, world-wide inequality and workers rights are global. Dividing the world into separate sovereign states means that the scale of decision making - a state - does not match the scale of the issues - the planet.

Solutions to the violence associated with borders would likely include:

Borders are not a natural part of the world

The concepts of states, nations, borders and territories have emerged over the past 5000 years. They're part of a system that attempts to preserve privilege and opportunity for some people by restricting other people's movement and access to resources.

In the early days of states, most poor people were unable to move from their immediate locality, being either slaves or serfs. Following the abolishment of slavery in some locations, the poor were often still unable to move as they wish without being criminalised through vagrancy laws, or through being tied to an employer with threats of violence or unpayable debts.

The development of cartography in the 16th century was a necessary technology to enable the definition of borders. At that point, administering land from a distance became possible.

The idea that states have defined boundaries, within which they have the exclusive right to administer as they wish, emerged as aristocrats gained control of economic and political authority in place of the Catholic Church. This was formalised via the treaties of Westphalia in 1648.

For most of the 20th century, borders were mostly just lines on maps. They were only heavily guarded when states were at war with their neighbours. Before World War 1, passports were usually only required in times of war.

As states began to provide more services like health care, welfare and housing there was concern that non-citizens would take advantage.

The Law of the Sea turned 44% of the ocean into private property as recently as 1994.

These days, we live our entire lives in several overlapping bounded spaces, each of which affect our quality of life. For example, where you reside with respect to boundaries such as international borders, county boundaries, council districts, police precincts, school districts, electricity grids, trash collection areas, gated communities and those of private properties may determine your access to education, infrastructure, rights, health care, economic opportunities and more.

In 2014, the UNHCR reported 60 million people across the globe were displaced, including 14 million displaced by war.

More than half the deaths at borders in the past decade occur at the boundaries of the EU.

The attitude that violence at borders is an inevitable consequence when poorer countries border richer ones leads to policies that harden borders. But strengthening borders is a source of violence, not a solution to violence.

Blaming human traffickers for the adverse situation of migrants absolves states of their responsibilities.

Making the journey difficult has not deterred migrants in the past.

Countries such as Myanmar and China which have internal movement restrictions are often considered human rights violators. It's inconsistent to think that's true, but yet restrictions on movement between countries are OK.

Borders create, rather than reflect differences

State borders create, rather than represent, differences between peoples and places.

Nations are not the same thing as states.

The two are not necessarily contiguous. For example the UN recognised Somalia, a "failed state" that has not had a functioning central government since 1991. Whereas Somaliland, a region within the borders of Somalia which has been functionally independent since 1991, having its own elections, currency, military and a police force is not recognised as an entity.

The move towards decolonisation restored independence to states that countries like Britain had previously colonised. But the coloniser's borders were maintained which had been drawn up without consideration of the tribal, linguistic or ethnic properties of the residents. This led to many independence movements in Africa who dispute the assigned boundaries.

Furthermore, colonisers had focussed on extracting the resources of their colonies, leaving states with minimal investment schools, hospitals, local businesses or other infrastructure.

It is difficult to classify migrants into categories such as migrants, refugee and asylum seekers. Furthermore, classifying migrants in this way tends to divided them into people that deserve help and sympathy vs those who don't.

Refugees by definition must already have crossed a border in order to seek that status. Different groups of refugees have very different acceptance rates.

From the 1970s, economies have transitioned from being national to global.

For example, in the US an economy that was previously based on large factories employing unionised workers, regulated by the government, producing goods for domestic consumption has now moved towards multinational corporations which create factories in whichever country is cheapest, and long-distance transport their goods across borders.

By defining the edge of regulatory regimes, and limiting movement through them, borders have been essential to this transition. The create pools of low-wage workers in locations with minimal environmental and labor regulation.

Free Trade Agreements let goods travel across the world, but not people.

Borders and the environment

In direct terms, the physical construction of borders requires destroying plant-life, levelling the ground and building infrastructure such as roads. The surrounding areas are typically not maintained, and become covered in trash. Agents patrolling the borders cause further damage.

More indirectly, the use of borders to enclose resources creates pools of exploitable resources, with each territory creating different usage rules.

Ecologically privileged wealthy countries who have historically produced the most greenhouse gases can use their resources to alleviate the worst environmental effects for themselves.

A further injustice is apparent in that the geographic areas where pollution has historically been produced are not the same areas where climate change will have the most damaging effects, or where proposals for geoengineering will have the greatest negative impact.

Preserving certain areas as "nature reserves" gives legitimacy to the idea that destroying other areas is OK.

How to solve the problems associated with borders

The ideal answer might be a world without states as we know them. But incremental change is far more realistic.

A fundamental solution to the issues with borders would likely have to reflect the idea that all people should have the right to work and live within the boundaries of any state.

This fundamental step would address global wealth inequality. There are many historical precedents wherein the rights of citizenship have been extended to people previously excluded.

Inconvenience to the population of wealthy states is not a good enough reason to restrict the movement of less privileged people.

Whilst the most efficient way for a business to operate may be a free market, history shows this comes at the cost of poverty, despair and death.

Regulations may hurt corporate profits in the short term. But further out, they'd lead to the creation of more consumers across the globe, providing new markets for goods.

Global rules for environmental protection and limits on private property

We need to reconsider the idea that states have an exclusive right to make environmental decisions in their territories. The environment does not respect borders, so neither can our efforts to protect it.

Some of the funds raised via taxes should be used to tackle damage that, with the current state-based model of responsibility, isn't being addressed - for example the mass of plastic pollution in the Pacific Ocean, which "belongs" to no-one/everyone.

Likewise there's a need to rethink the unlimited right of property owners to exploit the resources on their property.