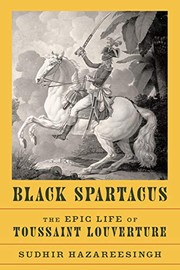 Toussaint Louverture was an enslaved Black person. He later achieved freedom and went on to become a leading figure of the Haitian revolution.

After the French revolution, there were demands for self-government and equal rights for free people of colour in Saint-Domingue, a French Caribbean colony. There was a uprising of the enslaved people in 1791 which led to the abolition of slavery by the in the colony 2 years later.

Toussaint was born a slave, became freed, rose through the military ranks to become a French general and eventually became the governor of Saint-Domingue. He had an enlightenment mindset, believing in the power of scientific ideas leading to a better society, including via education and economic reform

Reason and education will spread across our regenerated soil; once crushed under a yoke of enslavement which was as odious as it was grading, man will elevate himself on the wings of liberty.

His emphasis was on racial equality, conducting a just war of liberation - driven directly by the efforts and sacrifices of Black slaves, not White liberals. The victory was evidence against the commonly held belief that European people and culture were inherently superior.

He proved an inspiration to many during and after his life, becoming an inspiration for other such uprisings and causing panic amongst slave owners worldwide. He later featured in many artistic works.

Saint Domingue was claimed by Spain when Christopher Columbus landed in 1642. It became the world's largest producer of sugar and coffee, and also exported other resources such as cotton, indigo and cacao. The owners of capital became very rich during the 18th century. But this was built on a bedrock of extreme inequality, with half a million people enslaved by the late C18th. Enslaved people had no rights and were often treated extremely cruelly. However here they formed brotherhoods, practicing 'voudou' rituals, dance, singing etc. Many, known as marrons, escaped to hide, form groups and promote emancipation.

There was also a mixed race population, who were free (and occasionally wealthy). But they had fewer rights than white people, with legal discriminations keeping them separate and less privileged - bans on certain types of employment, some segregation and more.

Toussaint Louverture joined the fight in 1791. He was a complex, mysterious, controversial person, concealing information about himself, his movements and specific goals via misinformation and rumours.

He was emancipated more than 10 years before the revolution, and even owned slaves for a while. Many people see his rule as starting out emancipatory, but becoming authoritarian, for example by refusing to allow the poorer classes to buy small sections of land, and introducing extremely restrictive employment laws, including forced labour, and the import of workers via the slave trade. He claimed the governor appointment for life with the right to choose his successor.

He had a strong sense of determination and was not shy of dwelling on his own role in all successes. His power was grounded by his republican army, as well as the free Black population which embraced the principles of freedom, equality and justice, but also the colony's administrative structures, White planter and business class, as well as the Catholic church, whose religion he followed.

Whilst exposed to and adhering to European Enlightenment thinking, he reformulated it to fit local conditions, appropriating universal concepts to specific local issues such as slavery, racial hierarchy and the definition of Blackness.

He was known for being close to nature, and an intuitive genius, coming from his local upbringing and experiences. But he also defined himself as a man of reason, being familiar with European views on republicanism and philosophy - with a particular attachment to the common good, equality in dignity, freedom and independence from dependency on other states. His republicanism was rooted in military practice, liberation from slavery and occupation, integrating local traditions of mysticism, royalism, Catholicism and brotherhood - desiring a multiracial community of equals.

He appears an extremely brave and skilled fighter, often clawing his way to victory on the front lines of the battlefield. He was also a master of using negotiation, misinformation, distraction and diplomatic abilities to make progress towards this goals in other ways.

He reflected on his Blackness as a matter of heritage, pride, duty and honour, trying to occupy the moral high ground, promoting Black interests generally without feelings of revenge or disparagement against the White people. He claimed that the best way to respond to evil was to do good. His vision appeared to be that of equality between races, with his senior officials often being drawn from the White or mixed-race population. He punished anyone who caused harm to even the former slave owners.

In 1801 he created a new constitution for the colony. Article 3 read:

There cannot exist slaves...servitude is therein forever abolished. All men are born, live and die free and French

Whilst the constitution was not a declaration of independence, France felt it was damaging to their interests. Despite his incredible journey, in 1802 he was arrested by France under Napoleon, and died in jail the year after.

In overthrowing me you have cut down in Saint Domingue only the trunk of the tree of liberty; it will spring up again from the roots, for they are numerous and they are deep

Since then, he has often been a figure of inspiration and veneration especially in terms of the battle for emancipation, and has been featured in many artistic works.